I just had to share a picture of these fabulous cupcakes I made on Friday. It was a new recipe that I found on Pinterest (my new favorite cookbook! LOL)...Well actually I was looking up a different recipe and then found this one off the site I was taken to.

I always love it when people make cutesie desserts and I was determined it was my turn! I found some cupcake wrappers with matching toppers for $1.00 at Wal*Mart and decided I needed to use them. I found a can of pumpkin in my pantry and decided to try to find a pumpkin cupcake--I succeeded with finding this recipe and after tasting, it is a definite keeper! 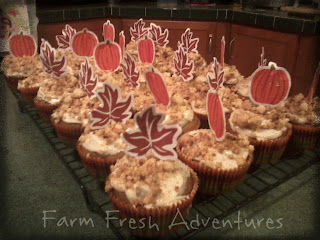 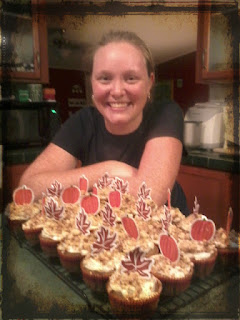 Here is me with my cupcakes. My husband's idea not mine. LOL! I had been preparing for Sabbath all day and doing a bunch of baking, so I look rather worse the for the wear! LOL!

As for their taste...mmmm...definitely a hit and a keeper! Delicious!

Here is the link to the original recipe--the only difference is that I opted out of the white chocolate in the frosting--why mess with a perfectly good cream cheese frosting?! LOL! 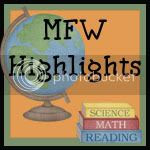 Hard to believe we are already 10 weeks into 1st grade!
It's amazing what 10 weeks can accomplish with skill levels!

The Lord detests lying lips, but he delights in men who are truthful.
Proverbs 12:22

A wise son heeds his father's instruction, but a mocker does not listen to rebuke.
Proverbs 13:1

Activity
*Dictate a letter
To remember that the Bible is a letter from our Father God to us, Little Britches dictated a letter to his Aunt Cindy, signed it and then mailed it.

The clapping syllables really helped Little Britches on this and I don't think he'll have issues with it.

We are continuing our reading in the Bible reader including in Day 1 and Day 2 of creation. I wrote the new words to learn for each day's reading on the laminated and magnetic 3 x 5 cards and put them up on the board for review. This works perfectly for us.

Math
A continuation of addition practice. He is getting so much better, though adding numbers larger than 4 worries him at times. But he uses a number line and does splendidly! 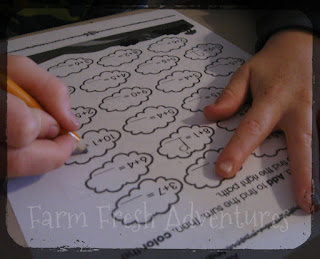 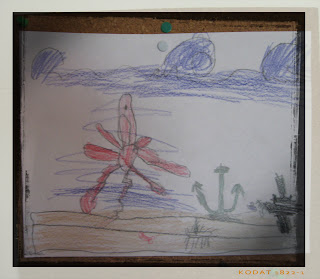 We watched the Magic School Bus Episode "Takes a Dive" to go along with this--a fun way to reinforce science.

Experiments:
*Underwater vision
We examined a spoon resting in a glass of water and discussed why it looks broken. Then we moved it until we found the point where it appears straight. 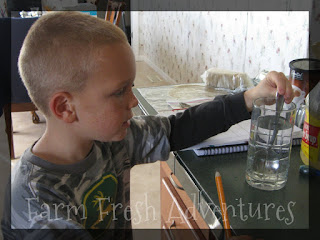 *Water Density
This was the real joy this week. I followed an experiment from the 101 Great Science Experiments book I own. Using corn syrup, oil and water, we made density layers and then dropped a collection of things into it and noted how the objects varied in their density. Very cool experiment for Little Britches AND Momma! 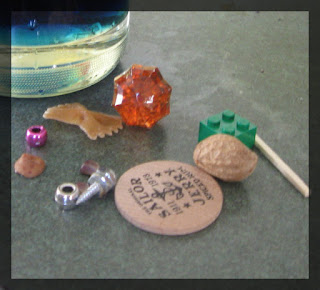 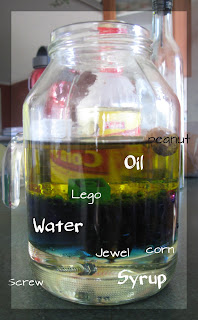 Here is our jar with the three layers of liquid and all those things dropped in. We had things go to every level which was great since I was hoping that would happen! LOL! 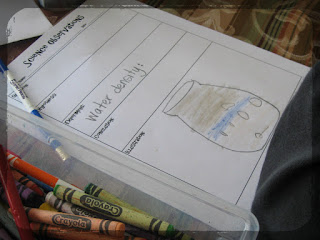 Little Britches filled out his observation sheet drawing pictures of the liquid levels and where the objects ended up.


*Landforms and Bodies of Water Puzzle
We scattered the pieces of the puzzle around and then he had to match the picture of the landform or body of water with it's name and description.

*Landforms and Bodies of Water Review
We did three levels of review and I am tickled that he only missed one question!

History
Story of the World: Volume 1
Chapter 2: Egyptians lived on the Nile River

We began by reviewing the lineage of the biblical character Nimrod--reminding ourselves that he is a descendant Cush--son of Ham--son of Noah. We then learned that Noah's son Ham had another son named Mizraim who is the one who settled in Egypt. Then we began reading Chapter 2 from SOTW about Ancient Egypt. 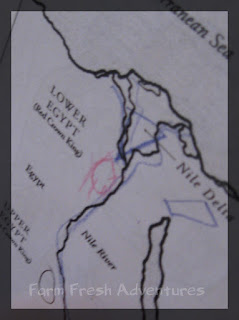 We completed our map of Upper and Lower Egypt from the workbook.

Imagine our surprise when we discovered that the Bible Study at church this past week was on Ancient Egypt. Never have I seen Little Britches so excited about a Bible Study! LOL! He even went up when it was over and told the speaker that he had been learning about Ancient Egypt in school!

Art
My mother-in-law rocked it this week with helping Little Britches create an Under the Sea diorama! I sent him over with an empty cracker box, paper and stencils...and he brought me home this! 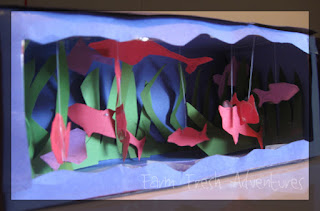 He was so proud of it! 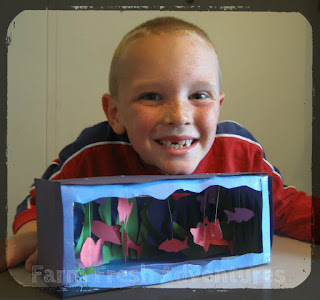 We added some shells on the bottom of it from our collection we picked up this year at Jekyll Island, GA and last year at Virginia Beach, VA!