Game night is a big deal here at the house. Some of our favorites are John Deere Checkers, Candyland, Chutes and Ladders, UNO, Go Fish and the reigning game of choice Farm-Opoly. I am always looking for new games to add to our collection and thought that Snake Oil-Party Potion from Out of the Box Games might be a hit. 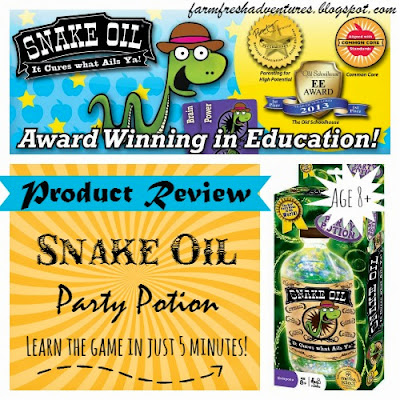 Out of the Box Games is a company believing that games need to be fun. They also need to be easy to learn and play. The company specializes in games that can be learned in minutes, played in under an hour, are very colorful and very fun to play. Since 1998, they have become a prominent leader in American games and have won several of the most prestigious awards in the game world.

Several of the games are lauded by the education industry for being aligned with Common Core standards, making the games a hot commodity in the classroom too.

One of their newest games is Snake Oil-Party Potion.  Based on their original Snake Oil game, the newer version was designed for younger children to play (age 8-adult). The concept of the game is simple: One player is the "customer" and picks from a stack of customer cards. All the other players are dealt five word cards. They then pick any two of their cards to make a "product" to sell to the customer. One at a time they present their product to the customer-explaining what it is, what it does, and why the customer needs it. Once everyone has presented, the customer then decides who had the best product for them. The winner receives the customer card and a new customer is chosen and the game begins again.

In the Snake Oil-Party Potion, the words are simplified to basic nouns and verbs (rescue, scooter, dirt, shoe, foot, hop, etc) while the customers are everyday people and jobs (fire fighter, astronaut, grandma, toddler, etc) to make it easier for the younger ages to play.

The Snake Oil-Party Potion cards can be played separately or could be added to the Original Snake Oil game for greater play.

We received the game Snake Oil- Party Potion to review for our family.

How Did We Use This Product?

Snake Oil- Party Potion comes in a pretty and more sturdy box. The directions for playing the game are written right on the back of the box for easy start-up. Included in the box are the word cards (2 stacks), the customer cards (1 stack) both in a black plastic tray. There is also a small booklet with the directions written again, ideas for playing the game in a group and in a LARGE group setting, as well as a brief history about what snake oil was.

I actually put off the game because once I got it and really looked at it, I questioned whether or not we could even play it with our family. My husband wasn't hot on playing it, because he didn't like the name of it. When i explained how it was to be played, he said he didn't think it would work for us.

We tried it, and he was right. My 8 year old (though in the range of age on the game) didn't really understand the concept of "selling" the product to a customer. He could come up with ideas for products from his cards, but initially had a hard time describing what it looked like or what it did. And then he was clueless on how it could be used by the customer, much less how to sell it to them. It took a lot of prompting. And since one of us had to help him, that only left one other player. The game is not meant for just two players (as it states on the box).

So we quit playing and instead just started grabbing random sets of cards to see what kinds of things we could come up with. MUCH hilarity ensued as we got combinations like "Snot Mist", "Butt Dust," and "Foot Pimple". Then we started talking about how fun it would be to play this game with my parents and some close friends.

We put the game aside...

But the next day, I had an idea. I decided to maximize on the parts of the game that Little Britches COULD do and use it in our homeschool. I gave him a blank piece of paper. Then I dealt him 5 word cards and one customer card. His instructions were to create a product using 2 or 3 of the word cards for the customer. He needed to draw a picture of it and write at least 2 sentences describing what it was and did, and why his customer needed it.

It was a match made in heaven. He LOVED this assignment and eagerly went to work. Here are some photos of two of the ideas he came up with... 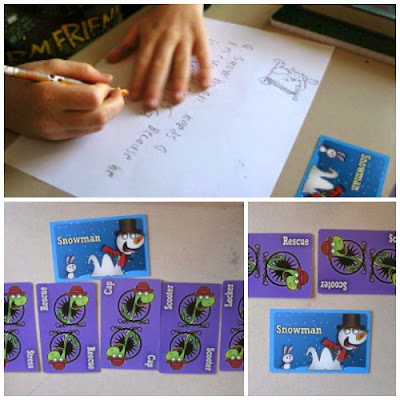 Customer: Snowman
Product: Rescue Scooter
Description: When the snowman is melting he can take a rescue scooter. The rescue scooter will always rescue him to the mountains so he won't die. 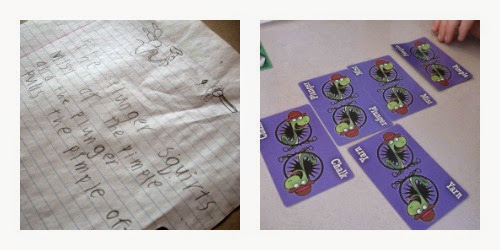 Customer: Chef
Product: Pimple Mist Plunger (ahem. Yes. I know. Nasty)
Description: The plunger squirts mist at the pimple and the plunger pulls the pimple off.
(I am still not sure why a chef needs this...but the vision that pops in my head is hilarious)

Today he came up with a Trumpet Kitten Tickle(er) for "Grandma". When you blow it, a hand comes out and tickles the kitten.  I think he enjoys drawing the pictures more than anything else. LOL!

If his word cards were "boring" I let him trade in one or two of them and get a new one. We only had to do this once or twice. This assignment has worked so well and he enjoys it so much, I will keep it in our daily work for awhile. I think that by doing it he will gain skills for playing the actual game the next time we do.

What are Our Thoughts on This Product?

Little Britches:
"I think the cards are really funny. I like how you get to come up with something silly by putting words together. I really like using it in school too. I wish I could get the cards like "butt" or "snot" more often because they are funny."

Love-Of-My-Life:
"The game is fun. But I really don't like the name of it (Snake Oil) because it brings to mind something sneaky or negative. I also don't think this is something that's really intended for anyone under 13. The concept of trying to sell the product you have come up with just goes over their heads at that age. They are doing good to even put words together to make something up...we won't be able to play it as a family right now without a lot of assistance--since we only have 3 of us even older than 8 years old. But I think it would be really hilarious to play in a group of adults. That would be fun."

Me:
I basically agree with Love-Of-My-Life. I'm not incredibly fond of the name either, but I did like that they included a small information sheet explaining where the term came from. That there really was indeed SNAKE OIL at one point.

We ended up taking out two of the customer cards and two of the word cards because they were "occupations" and words that we don't use in our household-but since the offending "customers" were on different cards we just taped them together to make a "new" card.

The cards are high quality like a normal deck of cards. The font on the cards is large and very easy to read. I found that the words on the word cards were fairly basic and easy to understand and the customer cards included roles and careers that the boys could recognize--this is what supposedly makes the Party Portion version of Snake Oil better for younger players.

The game was VERY easy to explain and to put into practice...but with our household of a 4 year old and an 8 year old, it's not an easy game to play with just us.  Now, I think a group of 8, 9 or 10 year olds could easily play it together because they would just be silly and not care about the details of how it's really supposed to work. LOL!

In the role of a new creative writing assignment for our homeschool, I love it. LOL!  He looks forward to it every morning and I have no trouble getting him to do it.

With the price of $14.99...I don't think I would purchase this on my own. It IS just cards. I think if it was in the $10 range it would be more reasonable for what I would be prepared to pay for it.

Would We Recommend This Product?

The pros far outweigh the cons on this product. It's got the makings of a hilarious game that would be so much fun for a group of people to play. We laughed just playing around with the cards and coming up with random combinations.

The Party Potion version is intended for age 8+ and contains easier to read and understand words and customer cards, but we still don't think it's something that could really be played (without assistance anyways) by someone less than age 10 very easily. The challenge was not in coming up with the product, but describing what it did and why it's useful for the "customer" and then selling it as something someone would want to buy. It would be hard to play in a mixed group with children under about a teenage level for this purpose.

Will we keep playing this game?
Well, right now we are going to continue to use it as a creative writing tool, but we have plans to play it the next time we get a group of friends together. We really think it will be fun to play...just maybe not as a family right now.

We reviewed Snake Oil- Party Potion ($14.99) by Out of the Box Games. We didn't quite use it as it was designed, but there were a lot of other reviewers who did! Why not head on over to see what some of my fellow crew members thought of this game and the other version of Snake Oil that our team reviewed!

Want to see more from Out of the Box Games? You can find them on these social media outlets.
Facebook:
http://www.facebook.com/OutoftheBoxGames

While this game didn't end up working for us in it's intended form at this time, we are enjoying using it to enhance our homeschooling studies. The vocabulary being learned from all the word cards is an extra bonus! But, I am dying to try it out in a group setting to see how it REALLY gets played...my brother is coming in for Thanksgiving...we might have to give it a go then!

Well, this ends my 2014 review for The Old Schoolhouse Review Crew...but fear not! I just received my acceptance for the new 2015 year and I've heard that we are booked solid with vendors and I'm dying to see what is going to be available!

Stay tuned because next week, I'm going to do a "Best Of 2014" post, where I share with you what my top 5 favorite things I reviewed for the crew was this year. To see a full list of what I've reviewed, you can visit my Curriculum and Product Review Page!