Fresh from the Bookshelf~ With This Ring?: A Novella Collection {Book Review}

I have mentioned in other posts about my love for historical fiction. I just love being transported back in time with the stories I read, so that I can experience eras past from the safety and comfort of my couch! I was able to enjoy doing this again with my latest book for review from NetGalley With This Ring?, a novella collection by four of the top inspirational fiction authors on the market today. 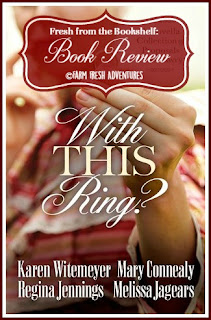 With This Ring? (released January 5, 2016) is a novella collection by popular christian historical fiction authors Karen Witemeyer, Mary Connealy, Regina Jennings, and Melissa Jagears. You might recognize a few of those authors, as they regularly appear in my review list--I actually just reviewed another book by Regina Jennings last week--so you know they are some of my favorite. With This Ring? is a collection of four short stories introducing you to four couples who have marriage proposals that go awry, set in the late 1800's in the wild west. From bad weather, to dangerous men, to just bad decisions, these couples are forced to confront their latent feelings for each other...for better or worse!

The Husband Maneuver by Karen Witemeyer
It was joy to journey back to a few characters from the book A Worthy Pursuit in this novella. This story follows Marietta Hawkins and Daniel Barrett (the former bounty hunter partner of Stone Hammond, the lead character in A Worthy Pursuit). Marietta Hawkins adores Daniel Barrett--partially because of the "Dead-Eye Dan" dime novels loosely based on his life story as a bounty hunter, but mostly because of her experiences interacting with him as the foreman of her father's ranch. She just can't seem to get him to notice her as anything other than his boss' daughter.

Daniel Barrett is in love with Marietta Hawkins, but because she's his boss' daughter, he refuses to show any interest in her--and even decides he needs to resign as foreman so that he can have a chance with her.

Everything comes to a head when instead of going on a cattle drive, Daniel stays behind at the ranch to prepare for his move to his new property--not knowing that Marietta caught wind of his plans and secretly decided to sneak back home, instead of going to be with her Aunt for the two week cattle drive. Now both of them are alone on the ranch and will be forced to deal with the feelings they have for each other...whether they like it or not.

Her Dearly Unintended by Regina Jennings
Katie Ellen Watson is determined to prove to her parents that she is capable of taking care of things while they are away....problem is that she's got a cow and calf refusing to cross a submerged bridge over a rapidly rising torrent of a creek. She just about gets them across when things go a bit unexpected---thankfully Josiah Huckabee arrives to check on her. Problem is, she really can't quite stand him--and now all of a sudden, he's stuck on her farm thanks to the only bridge on her farm washing out!

Runaway Bride by Mary Connealy
Mary Connealy's two popular series The Kincaid Brides and Trouble In Texas collide in this delightful novella! Runaway Bride follows Big John Conroy--the fifth man (and only one not married) of the band of friends called The Regulators of the Trouble in Texas Series--as he attempts to help Carrie Halsey from a dangerous man intent on making her his wife.

Hired by his friend's sister's husband's wife Audra (LOL!) to bring her sister Callie to her up in Colorado, he is ill prepared for the trouble he'll be dealing with...the LOVE kind, and as an always on the move Texas Ranger, he's sure that's the worst kind of trouble he can have. Carrie and her brother just want to get away and go to their sister in Colorado before Carrie is captured and forced into marriage, so they willingly and eagerly follow Big John, no matter what he says. Everything comes to a head when he takes them to safety in Broken Wheel, Texas where the rest of the Regulators are--and they are forced to confront their feelings for each other.

Engaging the Competition by Melissa Jagears
Harrison Gray and tomboy Charlotte Andrews have been rivals for years. He's never forgiven her for outshooting him in front of their friends, with his own gun back when they were just kids. Now they are back in the same town as adults--she as a ranch owner and he as the local schoolteacher. With Charlotte spoken for by someone else (someone Harrison is SURE is wrong for her), it seems like their differences will never be settled. But when Charlotte breaks Harrison's glasses--without which he's nearly blind--she must help with his teaching position. Will working together force these former adversaries to reconsider everything?

My Thoughts On the Book

Unlike some novellas (including one I recently reviewed), this collection has COMPLETE stories. Even though they are shorter than the normal novel, they don't feel extremely rushed. I think part of that is due to a couple of them being continuations of other series, so not as much back story is needed. I enjoyed all of them, though Runaway Bride by Mary Connealy was my favorite--mostly because it was a perfect blending and conclusion to two of her series which I have read (and reviewed!). I think one of my favorite parts in the story was where the lead character Big John was reflecting on his four friends and in his reflection, the author included the actual book titles to each of his friend's stories, as part of the dialogue. That is something only someone who has read the Trouble in Texas series would even have caught. Which I obviously did! LOL!

The one I liked the least and felt needed the most help, was probably Her Dearly Unintended--just because I felt like this one NEEDED more backstory as to why the characters thought what they did about themselves. I felt like I should have read an earlier book or something to meet these characters. I did like the obvious reference to Katie Ellen having a touch of OCD--something that wouldn't have necessarily been "diagnosed" during that time period.

I think that the only novella that really needed the reader (me) to be already familiar with the background of the characters was the novella by Mary Connealy. If you aren't already familiar with her previous two series, you might be a bit lost as to the back story of the lead character Big John and his friends. But I think that's the only one that doesn't really stand on its own. I do think, however, you can not be familiar with the story, and still enjoy it. I just think you would enjoy it MORE if you were knowledgeable of the Kincaid Brides and Trouble in Texas series. 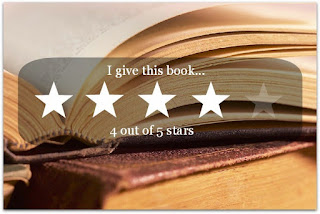 I give this book a solid 4 stars because it was well done, I enjoyed the stories, and is better than most novella collections. I am sure that major part of that is due to the high caliber of writing and experience of each of these four authors. If you are familiar with these authors' books, especially the two series by Mary Connealy that I mentioned above, you will want to grab With This Ring? and read it for yourself!

With This Ring?: A Novella Collection of Proposals Gone Awry
By Karen Witemeyer, Mary Connealy, Regina Jennings, and Melissa Jagears
ISBN #: 978-0764217722
Available in Paperback and Kindle 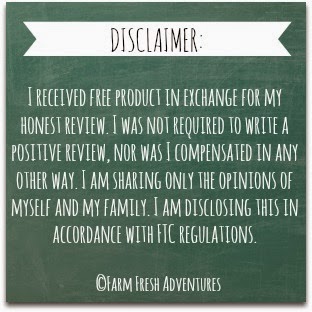 I have been thoroughly enjoying the latest pile of books that I have been given to review, especially because so many of my favorite authors are included! With This Ring? was a fun and easy read, and I especially loved that it tied up two of Mary Connealy's series for me. I urge you to visit your local library and request it for yourself--or any other books by these four delightful authors!

Labels: book review, Fresh from the Bookshelf, NetGalley
Email ThisBlogThis!Share to TwitterShare to FacebookShare to Pinterest