We have been been history buffs for a long time. One of the ways we have been learning and exploring ancient history is through the delightful Heirloom Audio Productions audiodramas. We've sailed the seas with Captain Drake, fought for freedom with William Wallace, rode alongside General Lee during the Civil War, fought off the Danes with King Alfred, and watched with Beric the Briton as Rome burned. We have learned new things and become familiar with figures from ancient history, but I am always looking for something more to help them remember what we learned. I have discovered that Famous Figures of Ancient Times from Timberdoodle is an excellent addition to our homeschool to do just that and I was tickled to have a chance to share my review with you. 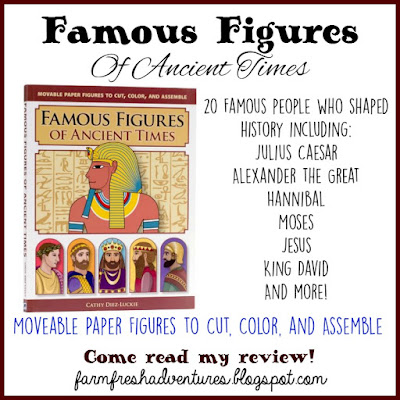 About Famous Figures of Ancient Times 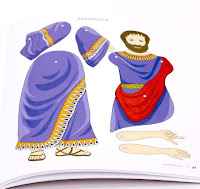 Famous Figures are a collection of paper doll like figures from history that can be colored, cut, and assembled and used to visually help your children make connections in their learning. There are several books in the Famous Figures collection, including Famous Figures of Ancient Times. This book contains twenty people who shaped history including Julius Caesar, Alexander the Great, Caesar Augustus, Narmer, Hannibal (and his elephant!), Moses, Jesus, and more! Every character is available in color and black and white, allowing your child to personalize their character if desired. Once colored, they can cut the character apart and then attach the pieces together with small brads (not included), creating a moveable paper figure!

This book is available at Timberdoodle Co for $18.95 and is included in their 2016 First-Grade Curriculum Kit.

Our Thoughts on Famous Figures of Ancient Times

I have been curious about this product since the first time I saw a friend blogging about it as part of her history curriculum. I love the concept of having the characters to tie into what we are learning! For our review, we chose to do Julius Caesar. We had just finished listening to Heirloom Audio Productions' Beric the Briton which takes place mostly in Rome. We had been chatting about the Roman culture and their leaders, so it was a perfect connection to learn about Julius Caesar and cut
out the character. I decided to go with the pre-colored character this time and Little Britches worked on cutting it out, punching the holes, and inserting the brads. 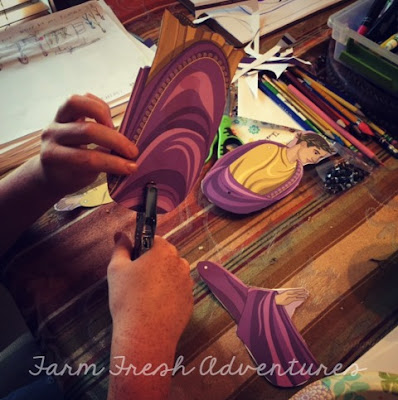 Timberdoodle Co, generously included a hole punch and tiny brads as part of the review of this book.

I appreciated that I could use the information in the front of the book as a guide to talk about the character and his place in history. I think having these little paragraphs are very helpful for using the book. 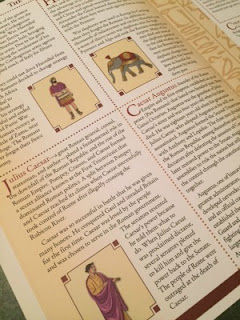 I found that the characters didn't have too many pieces to cut and put together which is great considering Little Britches doesn't care for tedious detailed cutting. Both boys liked how the character wiggles and moves once put together, and they would have him walk along the counter and talk with silly voices. 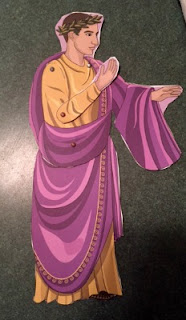 Now, he's on our fridge and they each can name who he is and where he is from. I plan on saving him and pulling him out again when we get back to Ancient Rome in our history.


There are some great characters in this book, and I love that BIBLE characters were included too. We are ramping back up our biblical studies with the new year, and I foresee us using the Famous Figures of Ancient Times from those studies as well. (I didn't want to really use any other ones since we are on a summer break, and not studying history right now.) As we continue to use the characters, I will offer them the choice of either using the pre-colored or coloring their own. Sometimes they get in the mood to color everything themselves.

I think these characters are a great asset to history studies as they give a visual to connect with what you are learning about. I definitely plan on collecting some of the other books in the series--especially any on American History, which is what we will be studying this year. 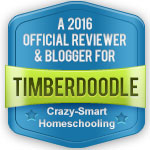