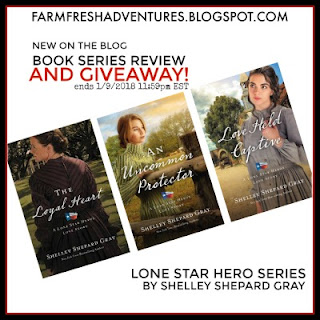 Do you like Christian Fiction? Do you like Historical fiction? Do you like stories of Civil War and deep friendships of brothers in arms? If you do, I highly recommend the A Lone Star Hero's Love Story series by New York Times Bestselling Author Shelley Shepard Gray! Read my review and get entered to win the complete series in paperback!

This three book series takes place during and after the Civil War and follows four men--four Confederate soldiers who fought together, were captured, and survived Johnson's Island--a Confederate States of America Officers POW camp. These band made a pack while prisoners to always have each others backs no matter what. The book series follows the lives of the four men POST Civil War and explores their lives as move forward to pick up the pieces and finding love in a war torn land--and how their friends will ALWAYS come to help when they are needed.

The first book in the series is The Loyal Heart and follows former Second Lieutenant and Confederate officer Robert Traux. Robert heads to Galveston, TX to make good on a promise he made to a fellow officer in the POW Camp at Johnson's Island, OH upon his death. But promising to take care of Phillip's beloved wife Miranda is harder than it seems--for when Robert arrives, he finds Phillip's gorgeous wife dealing with local citizens believing Phillip was a traitor and she is being treated as an outcast. Determined not to leave until he protects Miranda and reverses her reputation, he also promises to find a way to make her smile again.But that may be harder than planned, for there are people determined to strip Miranda of everything she has and will go to any means to do it! Looking after a friend's widow from a distance becomes infinitely more challenging when you fall in love with her yourself.

An Uncommon Protector is book two in the A Lone Star Hero's Love Story series. It's not every day that you take a chance and buy the freedom of a prisoner from the local jail, but when you are overwhelmed with the responsibilities of running a Texas ranch on your own like Laurel Tracey is, you tend to take risks. By agreeing to offer him room and board for one year, he will have to work for her to pay off his debt--and she definitely has enough work on the two hundred acre ranch. Former soldier Thomas Baker knows he's in trouble when he gets jailed after not being able to pay a couple fines--especially when you are deliberately mistreated and singled out by the men in charge. So he agrees to take up Laurel's offer as his ticket out. He is determined to count the days until he's free again, work hard on her behalf, and remain detached from the fact she's everything he's ever dreamed about in a woman. But, cattle start dying and Laurel's life is threatened. This changes everything and Thomas determines to lay it all on the line to keep her safe.

The final book in the series is Love Held Captive. This book follows the lives of Major Ethan Kelly and former Captain Devin Monroe--two men who discover that the women of their dreams have both been caused pained by their former colonel, Adam Bushnell due to actions he committed during the Civil War. Calling on their former fellow soldiers Robert Traux and Thomas Baker, the men band together to hunt him down and bring him to justice for the pain he's caused the women they love so they can heal.

My Thoughts on the Books and Series


I quickly fell in love with the men in this series right from the get go. These books are set in one of my most favorite times in history to read about, and take place in one of my most favorite settings--wild Texas! I love that you get to meet ALL the men in the first book, and then slowly explore more about each one in the subsequent books as their history BEFORE the war, during the war, and during their time in the POW camp is revealed. It really isn't possible to jump to books two or three without having read them in sequence, for book 2 picks up right after book one and book three right after book two. You don't get the "whole picture" unless you have been able to piece it together in order.

I actually preferred the men in these books to the women, however the women WERE strong characters. None of them were pansies and each woman in the series was dealing with the hand life had dealt them, and were trying to rise above it all. There were great messages about letting God have control in your life--especially when things are out of control--throughout the book. Book three really engaged me as a reader the most as it dealt with thoughts on dealing with the aftermath of rape and prostitution (now reformed)--and how the women involved were able to move forward in their lives. Also in how it was possible for the men to love them in spite of their tragic pasts--even if the men first had to come to grips with it. Great messages of forgiveness and spiritual renewal.

Of the three books, I think I enjoyed book two the best overall, because I just enjoyed Laurel and Thomas' story the most. These books really promote an incredible message of friends who are closer than brothers and friends who willingly will lay down their lives for you. It was so cool the way that in each book, the four men came together to help one another no matter the situation.

As a whole, I give the A Lone Star Hero's Love Story series by Shelley Shepard Gray a 4.5 rating. It kept me engaged and I felt the characters were well developed. Even though a back story was carried through THREE books, it was never lost in the shuffle. The topics were meaningful and the writing great. I eagerly awaited each subsequent book in the series and was sad to say goodbye to them. I highly recommend this series to my friends and readers who enjoy Historical (Western) Christian Fiction! I am so thankful I was able to receive these books to review by The Fiction Guild!

Check out more of Shelley Gray's work in my review of Whispers in the Reading Room as well as these other novels! 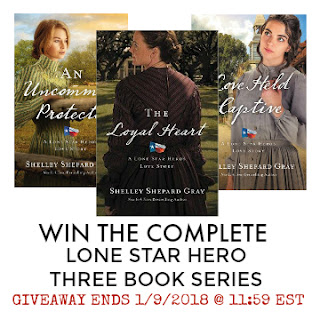 I am thrilled to be able to offer one lucky person a set of the COMPLETE A Lone Star Hero's Love Story series in PAPERBACK! I am not going to make it complicated--simply fill out this little nifty gadget below to get entered to win! The only MANDATORY entry is a blog comment answering: WHAT IS YOUR FAVORITE GENRE TO READ?

Labels: Fresh from the Bookshelf, giveaway
Email ThisBlogThis!Share to TwitterShare to FacebookShare to Pinterest

My fave genre is historical fiction and dytopian fiction.

My favorite is historical fiction, currently!

I love to read Christian fiction of just about any type! My favorites are mysteries, and historical novels. Thanks for the opportunity to enter. Shelley Shepherd Gray is a favorite author of mine!

I am a Christian Fiction reader. I read any type, just nomdystopian or sci fi. Thank you for the giveaway opportunity.
perrianneDOTaskewATmeDOTcom

My favorite genres are Historical and Suspense! Of course with Romance, and they gotta be CF. These books look so good. I love the North and South series, with Patrick Swayze, I think they did a great job for the period. I love the 1800s, as well as the 1940s-50s.

I read Christian fiction of any type except dystopian or sci fi. Thank you for the giveaway oppportunity.
perrianneDOTaskewATmeDOTcom

Thanks for the awesome giveaway!! Love suspense and romance!!

My favorite read is Historical, C.f..
Thank you for this opportunity
Robyn Farley

Historical fiction is my favorite genre, American history in particular, and going beyond that I normally enjoy books set in the American west. So I think this series might be right up my alley!

I like a variety of genres but historical is probably my favorite. jarning67(at)hotmail(dot)com

My favorite genre is historical fiction. I'm torn between the 1700's England stories and the 1850's and after American West. So many choices!

My favorite is Christian Fiction where the authors are delving in with tough topics and showing God's love through redemption.

I love Christian suspense, but read a lot of historical and contemporary as well.

It's been awhile since I've read any of Shelley's books. This series sounds interesting. Thanks for the chance to win.

Christian suspense and mysteries are definitely my favorite, but historical fiction is up there pretty far. I'm a homeschooling mom, and history is my favorite subject to teach. :-)

My favorite genres are historical romance, fantasy and Biblical Fiction. Can't get enough of'em. Thanks for the chance to win.

I enjoy historical novels, especially when the author includes tidbits of information from the time period she/he is writing about! Thanks for an opportunity to win!

I love Historical Christian Fiction bes. I also like mysteries/ suspense. All the better if they are in one book. I read the first one in this series and just loved it. I would love to have all three. Thanks for the opportunity to win it!

My favorite genre is historical fiction. I also enjoy cozy mysteries, suspense, and books that have a strong Christian presence woven in without being preachy. Can't wait to win these books!!! ;)

As an empty nester and wife of a hoot owl shift worker, I just love reading! I love all kinds of genre! Asking for a favorite is liking asking me as a mom to pick a favorite child, I love them all!
Christian Romance, Historical Fiction, Christian Mystery, Christian Suspense etc

Do I have to pick just one? I love all types of books. Whatever looks or sounds good at the time is what I grab :-)

I enjoy historical fiction, a bit of drama, and occasional self-help/inspirational.

I love historical fiction and mysteries.

I love historical fiction and mysteries.