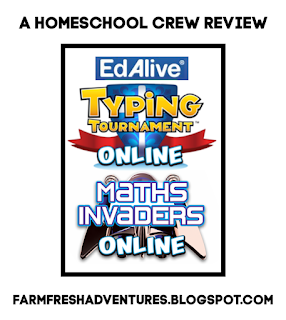 As we've done homeschooling over the years, there is one thing that I have learned about my boys--they really enjoy online programs. We limit our screen time in general, but if they have an online resource they are told to work on, they typically do it without asking. Therefore, when I had the chance to review two online apps from EdAlive, I was pretty confident without even asking them that the boys would be happy to work on them. Today I'm going to be sharing about the Typing Tournament Online and Math Invaders Online and what the boys actually thought about them.

EdAlive is an educational apps program developer based out of Australia. They have a long list of apps under their belt including Typing Tournament Online and Math Invaders Online. 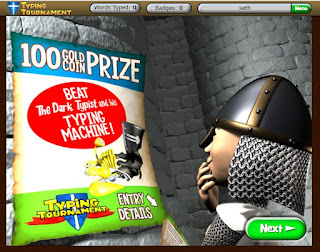 Typing Tournament is a medieval-themed typing course that is completely online. The goal of the program is to help the student improve their typing skills in order to achieve a set words per minute (wpm) goal (ranging from 22-108 wpm). Along the way, they earn badges and certificates as they move forward to their "big" tournament at the end. There are 128 lessons, drills, and games that are done to help teach the new keys as they are taught. These can be done over and over before attempting the test to meet or exceed the required wpm for the level. If the test is not passed, they can simply keep practicing the drills and games until they can successfully move on. If the goal needs to be changed, the student can easily raise or lower their final goal, which in turn adjusts the goals for each "level" on the program. There is also a simple speed test which can be taken to determine what your current speed is outside of the actual levels. 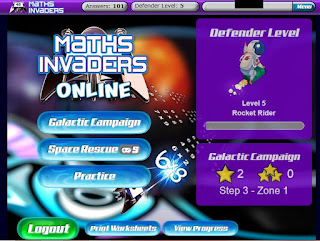 Math Invaders Online is an online resource designed to help your students with their mastery of math skills in grades K-10. Designed like a video game, the students work to keep math problems from "invading" their planet in the Galactic Campaign portion. To do this, they "fly" in their ship and shoot the math problems by answering the math problems correctly. They earn points for each problem ship they shoot and have the chance to earn bonus points. If they successfully defend their planet, they earn a star. They can move forward after their star, or earn BONUS points by completing the expert speed, and mastery speed for the same level--which simply has the math problem ships "attack" more quickly, requiring faster response time for answering the problems. There are ten levels (zones) each coordinating to a typical age range of math skills. It is possible to see what the skills are for each level on a topic chart in the "practice" screen. Simply hover over each box in the chart for examples of the problems covered.
If specific math work is desired for the student instead of playing the game itself, you can isolate the math problems by level or by topic. There is also the option to work on times tables (0-12) or even more advanced times tables which can be determined by the student. All of this can be found in the practice menu. 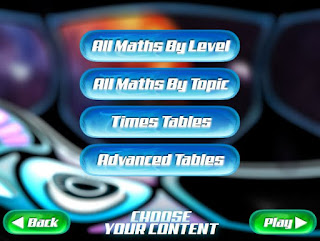 When setting up your child in the Galactic Campaign, you initially get to pick a zone for your child to work in. Clicking the example problems next to each zone number shows you the types of problems that will be covered. But it basically matches up with the grade level for school. So zone 1 is kindergarten/1st grade, zone 5 matches 5th-grade work, etc. If your child picks a zone and determines it is too easy, they can scroll up to the page to a new zone and click "skip here". This will allow them to play a game to test their math skills to see if they know what is needed to enter the new zone.

Another option for play is the space rescue. It is basically a math battleship. You can play it against others, or play it against the computer. You can have a big board or a smaller board. You click a square and it will tell you if you hit, are close, or missed a spaceship. Then before your next turn, you have to "charge" your torpedo and to do you answer a series of math problems that coordinate to the last level you completed on the Galactic Campaign. As you hit space ships you earn 100 points. Being next to a space ship earns you 50 points. Missing gives you zero. If you "sink" a ship, you earn extra points. It is a way to have more math practice.

The program also provides practice worksheets which coordinate to whatever level needs to be worked on. Your child can even do worksheets BEFORE completing their game to prepare themselves for the math problems.

Our family was given a one-year subscription to both programs to be used with both children. The apps can be purchased individually based on a monthly or annual subscription.

I'm going to try to keep this short and sweet, but we'll see how it goes. :)

Basically, it's a big 5 stars from us for BOTH apps. Although they didn't want to do it at first, now they both LOVE doing the Math Invaders. On their own, they've even started trying to get all three stars for each level before moving on. I appreciate that I can see a report to show me what their progress is. It definitely has urged them both to work harder on mental math--something one of my boys is better at than the other. Because of the repetition of the program, they are definitely getting quicker. As of right now, both boys prefer to work through the Galactic Campaign, although they do enjoy popping over to the space rescue now and then. Neither has any desire to do the worksheets, and I'm okay with that. My oldest likes to use my Kindle for the math game which allows both of them to be working on it at the same time. It's an online program so it works on basically any device with the internet allowing them to access it basically anywhere. We've even used it at the library.
The Typing Tournament is also a win for us. Both boys are working through it with their own goals for wpm. I set my youngest (Age 8) with the lowest goal of achieving level A-22 wpm. My oldest started at a higher level wpm, but it was having him progress way too quickly, so we took it down a level. He's now working level C--32 wpm. If at any time he doesn't seem to be making it further, I may decide to take him down to level b, but for now, he's doing well with level C. Each boy has achieved success on different lessons on the map. My youngest is currently working on stage 4, while my oldest is working on stage 7. We typically spend 10-15 minutes on the program depending on what aspect of the stage we are on. If it's a new stage, they do the lesson and 2 drills. If it's an older stage, they do a review on the drills, play the games and attempt the test.
One of the things I like most is that the test can be retaken over and over again until they pass. The challenge, however, is they cannot move forward until the test is passed. While 100% accuracy is not required, a set wpm is. Unfortunately, the boys have experienced being stuck on a test because they are ONE word less in wpm than required. While this can frustrate them, thus far after several attempts (usually 4) they have been able to move forward.

Neither boy has taken the speed test--and neither wishes to. I think it's more for those who don't know what to set their wpm goal at. I took it when I wanted to give the program a go and it revealed that I was between two goals. So I picked the higher goal and am working through the program.
The favorite thing to do on Typing Tournament is definitely the games. There are three games and all are geared to improve speed and also recognition/memory of the location of the keys on the keyboard. The favorite of my oldest is Dragon Chase--where he has to type in words fast enough to keep from being eaten by a dragon. My youngest prefers the Powder Keg--where he has to type the letters the dragon lights on fire, to put out the flames. Neither really likes Seige (where they have to type the words in order to destroy them so they don't siege the castle). The games are the same for every level. My youngest plays the Powder Keg several times before taking his test. I hear cheers from my oldest every time he defeats his dragon.

Now--from a parent perspective, I really appreciate the reports that both Math Invaders AND Typing Tournament provide me. At any time I can pull up what the boys have been working on.


I can check overall progress, or their weekly progress to see what test has been taken in any given week.

On the typing program, the boys can also see their keystroke mastery. It will tell them which keys they have mastered and which ones they are still working on.
Long story short, we will continue to use these throughout the summer as I think they are excellent additions to our summer work. I have noticed that during regular typing for writing assignments, both have started positioning their fingers more deliberately where they belong to attempt proper typing. So that is a definite example that it's working!

Here are some more photos from both programs... 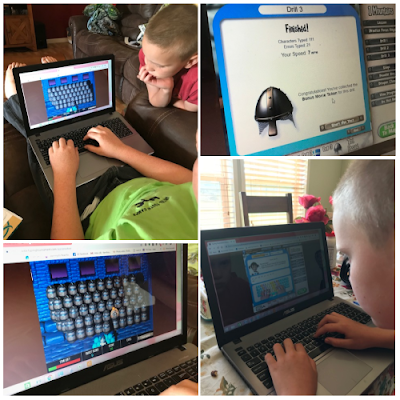 We highly recommend both of these apps as quality additions to your education program, regardless of whether you homeschool or not.

For the last several weeks we have been reviewing Math Invaders Online and Typing Tournament Online from EdAlive. You have seen how much we love these apps, but I encourage you to visit other crew members to see how they used them as well!