I had the pleasure this week of reading the book Noah Webster: Father of the Dictionary by Isabel Proudfit for a book review. This simple fictionalized biography captures the idea of a poor farmboy rising from his humble birth to influence the development of America, at a time when the country was just endeavoring to stand on its own. While the great leaders focused on creating laws and government for the brand new emerging United States, Noah Webster provided schoolbooks to the future leaders of the great American nation. 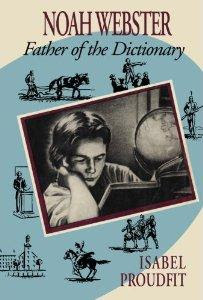 Noah Webster Father of the Dictionary

Disclosure of Material Connection: I received this book free from Bradford Press as part of the BookCrash book review bloggers program. All opinions expressed are my own and I was not required to write a positive review.

Let me start off by saying I love history. Biographies and autobiographies are my friends. I have learned much of what I know of history by going this route. I chose this book because it looked exactly like the type of book I would have chosen to read in school. I read countless fictionalized biographies when I was in elementary school and adored them.

The book is written at a level that upper elementary and middle school aged children could easily read. If I handed it to my 2nd grader, I think that even he could wade through most of the words successfully. I think it would be an excellent read-aloud book for elementary age students and a great addition to a US History curriculum as it focuses on someone who lived at the birth of America.

I think that if someone needed a crash course lesson on Noah Webster, this would be a very good book. Each chapter is fairly short and addresses a certain stage or event in his life. When the book opens, Noah Webster is thirteen years old. You learn his backstory as he reminisces on growing up, and when his mother reflects back to his birth. There is a good portion of the book dedicated to the events and influences that led the poor farmboy Noah Webster into the academic world.


Throughout the book you get bits and pieces of what was going on in history at each stage of Noah’s life. There is mention of the colonists’ grievances, the Boston Tea Party, the Continental Convention and even the “Shot heard around the World” as the Revolutionary War began.

It is this aspect that makes this book a great book for young students as they learn not just about a man, but about how his life was influenced by what was going on in the world around him. By making the connections, students will be able to remember that Noah Webster was alive at the time of the Revolutionary War, that he was a friend to Benjamin Franklin and was able to write books on early American History because he was living it. That is something far more valuable they will be able to remember more then just birth and death dates.

I loved how the author included actual pages and stories from the original books written by Noah Webster. That gives the reader and idea on what a lesson book would have been like for the early colonial children—and all those who used it as it was printed and purchased and traveled across the nation. I laughed at some of the little stories because they were so different from what our children are used to now. But that really adds an option for discussion from this book too. It would be easy to create a simple discussion paper to go with this book for teachers—whether in a classroom or at home—could use as a supplement of the book.

Really my only issue with the book is that there wasn’t any conclusion. It just ended with:


The garden never saw him again. The following day he caught cold, and by Friday he was very ill with a fever. Two days later he died peacefully during the evening. If he had lived another five months, he would have reached his eight-fifth birthday. (Proudfit p.219)

I feel like there should have been one or two more paragraphs to capture a final summary of what he had accomplished including his total number of books he authored—maybe even how long they were used before being replaced with a new curriculum. However--by ending the book without that information, it allows the reader to go find out this information for his or herself.

The only other drawback is that this is a fictionalized biography---so things have been added in to make it flow as a story, allowing for easy reading. I think that if you studied it with children you would need to make sure they understand this aspect. Perhaps even discuss the benefit of writing books in that form.

As you have probably guessed I highly recommend this book. It is an excellent resource and I plan on incorporating it into our own US History curriculum this year—especially since it will be focused on early American history and many of the characters we will learn about are mentioned in this book too. I am happy to have this book in my collection now—and I know I will never look at Webster’s Dictionary the same way again.

Very nice and great post.Really enjoyed reading your post. I appreciate your writing skills. keep standard going and waiting for new ideas and thoughts. Thanks for sharing your precious knowledge with us.