Fresh from the Kitchen: Taco Seasoning 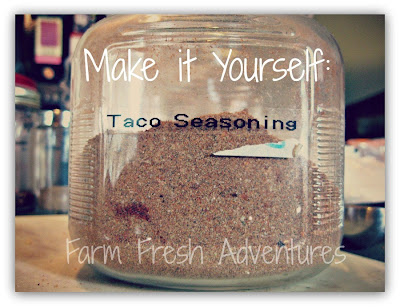 (scroll down for Taco Seasoning recipe)

WE LOVE MEXICAN FOOD!
I think we must have some Hispanic blood in us somewhere to account for our affinity to the food. Before our family made the decision to cut fast-food from our family's diet, Taco Bell was the restaurant of choice. When we used to go out to lunch after church, nine out of ten times it was to the local Mexican chain restaurant Toro Loco. And we went so often that they knew us and greeted us by name, patted Little Britches on the head and laughed among themselves as they watched him shovel down rice as fast as he could possibly manipulate his spoon, and watch amazed as he gobbled down the chips and hot (we don't do mild) salsa. When I was pregnant with him though I was working and ate Taco Bell every week for the first six months---nearly every single day.

Is it any wonder that child can put down rice, black beans and fiery hot salsa like it's going out of style?

In Texas on vacation, we enjoyed AUTHENTIC and oh so delicious Mexican cuisine...so needless to say we KNOW what we like. We pride ourselves in that we can take a bite of salsa and instantly judge it as being authentic when it comes to flavors and spice. LOL!
We also eat a TON of Mexican themed meals here at home now that I am cooking nearly everything from scratch.
I even made and put up my own salsa last summer for the first time.
DELISH!
I've been getting my taco seasoning in bulk (organic!) from various places and filling up a big jar. As I started scraping the bottom of that jar, I eyeballed my extensive spice collection, and decided NOT to refill that jar from any stores but to make it myself.

And so the great Taco Seasoning recipe hunt was on!
I pinned recipes...and then tried several. But the family agreed that they seemed to make the tacos taste more like chili...not the full taco flavor we've enjoyed.

So I put the call out on Facebook...
"I need Taco Seasoning recipes!"
And so they came from far and near...but nearly all of them had identical ingredient lists to the ones I had already tried and thrown out.

Until my friend Emily came to my rescue.
She had a seasoning recipe for me...and she told me that her husband's family loves it.
Why is that even relevant?
Because Emily married into a full-blooded Hispanic family...and they KNOW their Mexican cuisine! I knew that if the seasoning had their stamp of approval, it was clearly what I wanted.

The first thing I noticed was that her recipe was about twice as long as all the others I'd received...this means more spices...and more spices means more F L A V O R!!!
So I put together her recipe and then used it in my next bath of my favorite Mexican rice...
A M A Z I N G
It was a flavor explosion!
So I tried it on our next batch of tacos and the family agreed that it was deliciously spicey with a hint of heat. It's a winner and I'm not going back--though I admit I DID add a little tweak or two (like adding in Chipotle pepper).

Here are my "secret" ingredients which really took this recipe to the sky. 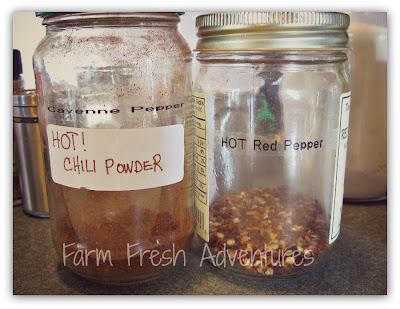 Why are they labeled "HOT"? Because they are NOT your normal chili and red pepper flakes. These ones will burn your nose hairs just by smelling them. AND too much of them will fry your tongue (just ask my hubby!)...which makes them perfect! LOL!

*Measure all your ingredients to the container you want to store them in*
Remember that it needs to seal if you are going to keep it fresh tasting. Mason jars work perfect for this. 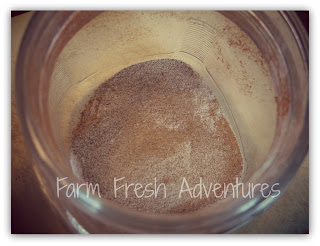 *Simply stir them up--or seal the container and give it a good shake!*

Now you are ready to go with your taco seasoning for any recipe that calls for it! And you didn't add any preservatives or other questionable ingredients. And using what spices you already have makes it soooo much more reasonable too!

Enough talk, right?!
CLICK HERE FOR THE PRINTABLE RECIPE
You will find TWO versions of the recipe---one for those who use a LOT of taco seasoning so need more on hand, and the other for those who don't use it as much and just need some to keep on hand.

Try it out for yourself and let me know what you think!
Especially if you decide to add your own additions!

Labels: Fresh from the kitchen, Recipes
Email ThisBlogThis!Share to TwitterShare to FacebookShare to Pinterest

This is the best taco seasoning!