Fresh from the Bookshelf: A Worthy Heart by Susan Anne Mason {Book Review}

An Irish girl visiting her brother in America, seeking to escape an unwanted suitor. A man, from a well-to-do family, recently released from prison and ready to start over. An accidental meeting in stable that leads to mistaken identity. So begins the story of Maggie and Adam in A Worthy Heart by Susan Anne Mason, book two in the Courage to Dream series. After falling in love with the first book in the series, I was more than happy to review A Worthy Heart, and hoped it lived up to book one. 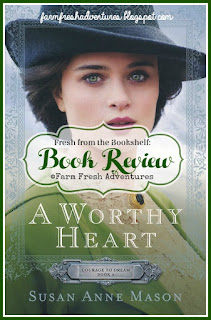 A Worthy Heart by Susan Anne Mason, is book two in the Courage to Dream series. Picking up three years after Irish Meadows left off, we are introduced to Maggie Montgomery, sister to one of the characters from book #1. Maggie is headed to America with her brother Gabe, in order to have a nice visit with their older brother Rylan, who is married to Colleen O'Leary (another main character from book #1). What Rylan and Gabe, and the rest of the family back in Ireland don't know, is that Maggie isn't here for a visit...she's here to stay! Desperate to escape the unwelcome attentions of a suitor back in Ireland, she has her sights set on becoming an American citizen. Meanwhile, Adam O'Leary, Colleen's brother and Rylan's brother-in-law has just been released from prison after serving three years. He's ready for a new start, and with his new found faith in God, he's anxiously hoping he can repair some of the damage he caused to his family. A chance meeting in the stables at Irish Meadows (the O'Leary family ranch) brings Maggie and Adam together--next thing they know, both are aggressively warned away from the other by family members. Now Maggie and Adam are seeking new opportunities and a future, and they are determined to not let their pasts define their possibilities for the future...but discover it isn't that easy, because the past doesn't always stay buried.

First off, let's talk about the cover. Isn't the cover just gorgeous?? Doesn't it just scream for you to pick it up? I adored the first books' cover, but I think this one is even more stunning. Like it or not, a cover really can make it or break it for me when it comes to my desire to read a book. This one just screamed my name as soon as it got in my hands! LOL!

So, does A Worthy Heart stand alone? Hmmm. You could probably get away with starting with it, but you REALLY should read Irish Meadows first to get a handle on all the characters. You will miss all the backstory relating to Adam O'Leary (and the rest of his family for that matter) if you just jump in on this book. All his talk about changing and second chances won't mean anything, if you don't understand where he came from and what happened to get him in jail. So can you read it without #1, I guess. Should you? No.

How does the plot stand up? I liked it. As with Irish Meadows, there was more than one plot going on. In A Worthy Heart, we didn't just have the story of Maggie and Adam, but also of Maggie's brother Gabe and a young lady named Aurora. Aurora was a minor character from Irish Meadows who gets a much larger time in the spotlight with this new book. Throughout the book, you are going to see things through Maggie, Adam, Gabe, and Aurora's perspective individually. Sometimes this can get to be too busy for a reader jumping back and forth between characters, but I think that the author did it very well. I actually think it flowed better in this book, than the same idea did in book #1. Book #2 didn't seem to be as rushed.

Characters. Do they each have enough baggage to make them believable enough for me? Yes! The author definitely touches on the faults and strengths of each of the four main characters and I didn't feel like any of them was too frothy and shallow. Out of all of them, I actually think Aurora was my favorite. It was nice to see her again and give her a chance to tell her story, even if it wasn't the primary focus.

A Worthy Heart is full of rich descriptions of the land and environment it's set in. I love the passages detailing Irish Meadows (the O'Leary property) and can just picture it in my mind. The writing of the book is very satisfying and I closed the book feeling like loose ends had been tied up, and stories had been brought to an end--which is why I'm very curious to see where the next book in the series will go--if there is a next book. Which I hope there is, even though I haven't heard a word about it yet. 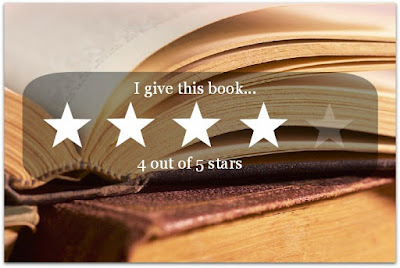 I definitely give this book a solid 4 stars. It was very good and well thought out. I loved the characters and felt the plot moved at a perfect speed. The characters were likable and you wanted to cheer them on. I would definitely recommend this book, and yes, I would even suggest someone might want to purchase the series.