Fresh from the Bookshelf: Whispers in the Reading Room by Shelley Gray {Book Review}

Historical fiction is my favorite genre. I have certain times during history that I am especially interested in, one of those is the time around the great Chicago World's Fair of 1893. That fair was such an exciting event and it showcased inventions and innovations beyond the wildest imagination of the time. There have been several authors who have used the Chicago World's Fair of 1893 as their background for their novels. One of these authors is Shelley Gray who wrote a series called A Chicago World's Fair Mystery. Whispers in the Reading Room is the third book in the series and I was eager to review it for the Fiction Guild! 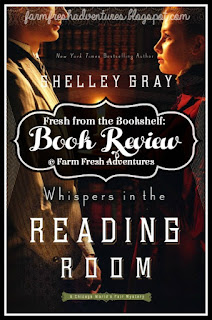 Whispers in the Reading Room is the third book in Shelley Gray's A Chicago World's Fair Mystery series. The story takes place just months after the conclusion of the fair, and centers around librarian Lydia Bancroft and Sebastian Marks, a regular patron of the library. She has been intrigued by him since he began coming to her reading room a year ago. He continued to come several times a week, and for the last few months, has been coming to her section of the library where he sits and reads alone. Throughout this time, he's never said a word to her, nor does she even know his name, but she is sure they are kindred spirits when it comes to books.

Soon she gets to meet him face to face, when he rescues her in the lobby of the Hartman Hotel, where she learns his name, that he lives in the top floor of the hotel, and that nearly everyone in Chicago is intrigued by him. They form a tentative friendship which is rocked when she discovers he's not just wealthy, but the proprietor of an infamous saloon and gambling club! One fateful night she visits the club and is suddenly thrust into a murder investigation and then everything goes haywire!

I was a little unsure as I began this book because it WAS the third book of a series. I don't like jumping into series because far too often you miss what feels like very important information relating to the characters involved. In fact, I'm super anal picky about reading series in order, so this totally went against my grain to read it before having any contact with the other books! LOL I was pleased to discover that this book didn't have that aspect at all. I could pick up references to a few characters from the previous books, but I never felt like I was missing a big piece of information. I definitely think this book can stand alone.

Now as to the characters, I liked the playing of opposites between Lydia and Sebastian. One is about as pure as you can get, while the other is the ruffian from the back alleys. I am all about making sure the characters are real enough, and I think that Lydia and Sebastian each brought sufficient "baggage" to shape and guide their reactions to what life threw out them. I think I preferred Sebastian to Lydia because of his inner turmoil in trying to keep her at arms length, yet recognizing his need for her presence.

I think the plot was well done, and it was interesting to have a lot of it focused on the gambling halls and back alleys of Chicago. Having some of the chapters begin with a "news article" was a nice touch and added a third "voice" to the story. 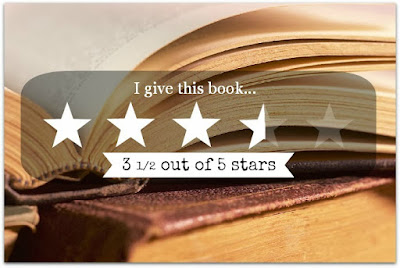 I think Whispers in the Reading Room was very well done and interesting. I didn't love it or think it was the best ever, but I felt it was very good and enjoyed reading it. I would definitely recommend checking it out from the library, but didn't like it enough to suggest you purchase it. I will however, be checking out the earlier books in the series to see how they all connect together.