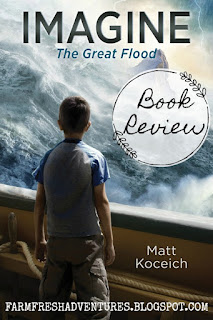 Because I myself enjoy Christian Fiction, I have been curious to discover if there was anything in Christian Fiction that my boys (Ages 7 and 11) would enjoy. Enter Barbour Publishing and a new book Imagine. . .The Great Flood by Matt Koceich, geared for children ages 8 to 12. I hoped that we would be able to discover an exciting new series as we reviewed this book as a family.

Imagine. . .The Great Flood by Matt Koceich is the first release in an all new series from Barbour Publishing. The series will bring to life epic Bible adventures in a way to allow kids to imagine what they would be like.


Imagine. . .The Great Flood by Matt Koceich follows ten-year old Corey as he is thrust into the world of famous biblical patriarch Noah immediately after he hits his head when chasing his dog Molly in the rain. How he got there he is unsure, but he is positive that the lions staring at him in the face are real. Your child will get to explore what it would have been like to be Noah's family in the days leading up to The Great Flood. What did the people think? How did they get the animals to come to the ark? What challenges did Noah and his son's face? What kind of faith did they have to do it? At the same time your children will be able to think about how Corey is going to get back to the world he knows.

Our Thoughts on the Book

My boys enjoyed our nightly readings of the story. Both boys could have easily read it themselves, but I enjoy having something for us to read together--and this fit the bill. The story was pretty easy to follow and there was very little that we had to change because of differences in our family's beliefs from that of the author. One thing that was awkward was the author's take on the biblical mention of nephaphim. The author treated these people as men with super powers of a sort so they were always the "bad men" chasing Noah and his son's down. There was also the addition of a "Satan"like character to the story in the form of a wizard like character Elizar. I think they were all added just for plot purposes, and fortunately, my boys are familiar enough with the story they clearly recognized these characters and their actions as being non-biblical.

Two additional discrepancies the boys noticed--in the Bible the scriptures simply say that animals went into the ark. The author has explored the idea that God had Noah's family go out and get the animals and bring them to the ark. The author even gives "empowered staffs" which protect Noah's family from any harm from the animals or other people. The boys weren't sure about this idea and it allowed us to talk about what the Bible says and what the book pictures and they were able to discuss what they think. Also, my youngest pointed out that the numbers on the animals were wrong. While they entered the ark "2 by 2" with male and female, the bible specifies that there were MORE than just a pair of each type of animal (Genesis 7:2-3 states 7 pair of each clean animal and 7 of each bird. And only a pair of every unclean animal) So he says that the author should have noted that in his book and they decided the author must not know his Bible very well. This allowed us to talk about what "literary license" means in books based on real accounts.

My thoughts on that--it's a book LOOSELY based on the biblical account. BUT because children are oh so very literal, I would highly recommend that your children know the biblical account very very well before reading this book. This will allow them to have discussions like we did--and help them separate fact from fiction.

Finally, there was one last thing that annoyed the boys. There was no explanation of WHY Corey imagined he was in the time of The Great Flood. One minute he was, and the next it was several months forward in "contemporary time" and he was moving on in his life reflecting on the lessons he'd learned. The boys asked "But why? What was it that he was imagining? Was he in a coma? Was it a dream? What was it?" They (and I agree) wish that there had been an explanation about what had happened to Corey to bring him to Noah's world. Instead it just sort of assumes you already know.

All in all--the boys give this book 4 out of 5 stars. They said they might enjoy reading the next book in the series depending on what it was about. They liked the excitement of the story very much--always asking for just one more chapter. They just wish there was a little more accuracy to a few of the little biblical things that aren't too much of a story changer (like the number of animals).

Over the last few weeks, we have been enjoying our read aloud of Imagine. . .The Great Flood by Matt Koceich from Barbour Publishing. I hope you will go and read what some of my fellow crew members thought about the book as well. 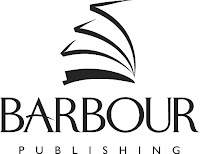 The boys were able to hear their first book of Christian Fiction and seemed to enjoy it. I will be looking for future installments in this series to try! 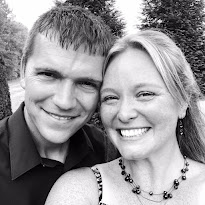