Taking to the Skies with Doctor Aviation {Curriculum Review} 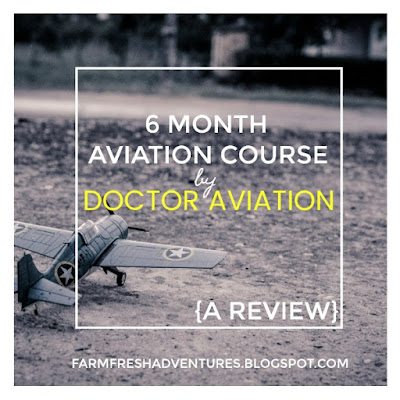 We recently completed an in depth unit study on the Wright Brothers, which led to my oldest son becoming fascinated with all things aviation. Immediately after we concluded that unit study, we were told that there was a six month aviation course from Doctor Aviation that was potentially up for review for us. Even though we were below the recommended age for using the program, after one sample lesson my eleven year old was begging me to be able to do it. This led me to "beg" on his behalf for the chance to review this product as a family, and I am happy to say that we were granted his wish. The question now became--how would a course geared towards a high school student or adult work for our family? I am happy to say that it passed with "flying" colors!

Doctor Aviation is an website dedicated to providing instruction to those with an interest in aviation. The instructor Daryl Smith, aka Doctor Aviation, was in the Air Force for 24 years, where he "traversed the sky" as Command Pilot in a whole host of aircraft putting in over 2,000 flying hours. Many of these were accumulated while he was an instructor pilot and research pilot. He has also served as instructor at the United States Air Force Academy teaching aviation as well as other courses. He also has authored an aviation book published by McGraw Hill. He's a current college professor who wanted to make an aviation course that could be accessible to life-long learners across the globe--and so the Doctor Aviation website and aviation course was created!

The course is geared to anyone with a desire to learn more about aviation, whether looking to it as a future career or just because you want to know more about the topic. Whether a homeschool student, parent, or hobbyist, this course can provide you with the basic information and tools to being a great aviator.

The six month aviation course is geared for those age 16+. The information provided, including the additional activities and tests to go with the lessons would be enough to provide a half credit for a high school student. If enough of the activities were done, it would be possibly enough for a full credit.

Here is a course overview:

Session 2 The Major Components of an Airplane
Session 3 Axes and Forces
Session 4 Why an Aircraft Flies: The Secret of Airfoils and Lift
Session 5 Why an Aircraft Turns, Pitches and Slides: The Flight Controls

Session 10 The City in and of Itself: Running a Large Airport
Session 11 The Small Airport and Running an FBO

We were given the six month aviation course to review as a family since we are below the age recommendation.

What Are Our Thoughts On It?


My son summed it up succinctly: "I love it!"

We initially got this course intending to do it as a family because we were under the recommended age; however, when we got started with it my son kept pushing me and my younger son away, telling us to leave him alone to study because it was HIS course. Eventually I realized that he wanted to work on it independently and really didn't need my help on it at all. I am now more of a mentor to help when he can't find words for his guided notes, or wants to explore the rabbit trails suggested by Doctor Aviation for each lesson.

From the very first sample lesson, he has loved this course. He has done very very well with the lecture style instruction. Surprisingly well actually. He even does well following along with his notes. I think it actually helps him focus more on what is being said when he has to record it on the guided notes.

Speaking of the guided notes, the only thing that he has against them is that he says he sometimes feels like he's copying every single word. He has to keep pausing and starting and pausing and starting and then backing up to get all the information recorded. He says that he'd prefer it if there was slightly less to fill in. He gets super interested in the lecture and then forgets to copy his notes down. Which then he has to backup and fill them in. But this is a great problem to have! :)

My son isn't a big fan of tests or quizzes, but I gave him the practice exam which is provided once lesson 3 has been completed. He not only didn't complain, but only missed a couple minor things and excelled on it!


Doctor Aviation provides "real" tests by request for those who want them for high school credit purpose--but I emailed and asked him for one because my son just legitimately wants to do one to test his knowledge. The first exam is available after the first five sessions have been completed, which is actually the end of unit 1 if you look at his course overview.

We really like the way each lesson is broken down into the three different areas. This allows us to space the usually one hour video course over two or three days--typically completing one section each day. Because the video won't remember where left off, we just make a note on the guided notes and adjust the video to where we left off the next time we log in. Each video lesson is portioned out into three sections, and the guided notes are separated and labeled this way too. At first I just printed them all out together double sided, but after the first two lessons, my son asked me to only give him one section of guided notes at a time so he doesn't get confused--so now we print each session out in sections so I can just give him whatever section he's working on.

Once my son completed the lesson videos, we opened up the PDF for the "Session _ to learn more" and we visit some of the links provided. Most of the items on this PDF are referenced in the session lesson as things to check out if you want to know more or see a real video or such. Some of the things included are diagrams, slideshows, YouTube videos of tests or live footage, movie clips, or images. There are also additional reading options for whatever the topic was for the session. These resources are a great way to be able to take the lessons even further! My son has LOVED the videos of the crashes, the tests, the movie clips...
One thing that my son suggested would make the course even cooler, is if Doctor Aviation would use the planes that are always behind him to point out the different things he's teaching about. My son always want to know more about the planes behind Doctor Aviation.

Thus far we have worked through 5 complete sessions doing one over the course of each week--sometimes if it was a bit longer, we moved it to the next week as well. We have also completed the Practice Exam and are getting ready to do the first regular exam. We have every intention on continuing this course throughout the summer and into our new school year. This program doesn't just talk about the technical aspects of aviation, but dives into the history of aviation!

As an aside, it has been really weird that every week that my son does a new session something in the "real world" mentions something he just learned. The first innovator talked about in Session 1 happened to be the Wright Brothers--who we had JUST completed an entire unit study on. The second innovator happened to be Chuck Yaeger--the person our nearby Yaeger airport was named after! When he was learning about lift, drag, and thrust, the Weather Channel just happened to talk about how the heat affects airplanes and their take off--using the terminology and information Little Britches had JUST learned. He was so excited! Later, someone mentioned something about the sound barrier--maybe on the science channel--and my son had just learned all about the first man to break the sound barrier and was able to answer the questions on the show easily. Then the internet released a photo showing that Amelia Earhart may have survived her supposed crash--right after my son learned about Amelia Earhart in his session. He happened to ask his daddy about one of the crashed airplanes he had learned about in session 5 (trying to stump his daddy), and Daddy laughed and said that they had JUST spoken about that on the Weather Channel that day and so the two of them were able to discuss it.

Would I Recommend this Product?

Absolutely! Although designed for a high school student or adult, my eleven year old has been eating it up. He enjoys the lecture and doesn't mind the note style. I was initially afraid he'd find them boring, but I was happy to be wrong. He passed his first practice exam and I'm sure he will have no trouble with any of the other ones. He can recall the information and facts and always goes to the "to learn more" for each lesson to watch more videos and see more diagrams about whatever was studied. I think the key elements to why this program works for him is that it's a LIVE person, it's mostly auditory/visual, and it's a subject he is keenly interested in. I encourage you to check out this program if your child has a serious interest in aviation, even if your student is at the middle school level--this program is excellent!

If you or your student wouldn't do well with a lecture style course, then this one might not be good fit, as that is the way the information is taught--however, having the guided notes may assist in that.


We have been LOVING our review of the six month aviation course from Doctor Aviation. You have seen how we have worked through it, but why not check out some of my other crew members to see what their families thought!

Doctor Aviation is very active on social media, so make sure you follow him to stay up to date on the latest news!

I am blown away by how much my son adores this course. I never have to deal with any whining or groaning when it's time to work on it. He has absorbed so much information and I have heard him sharing it with anyone who will listen. I can also say that the instructor Daryl Smith has been great about responding to any questions I have via email. If you have an aviation buff in your family--I encourage you to give this course a try!