Independence Day 2017~ A Christian Reflection on the Declaration of Independence 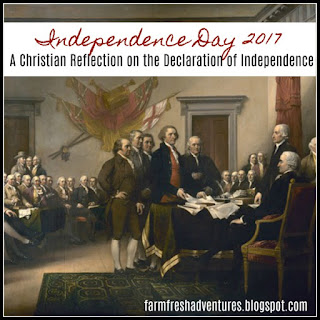 It is hard to believe that we are already at the 4th of July celebrations for 2017. Time just speeds along so quickly. Even though it was 241 years ago, I'm sure that our forefathers of 1776 felt the same way. Time was hurrying them to major events. Their colonies were in the midst of the first "Brexit" and in the heat of war. They were trying to determine what was going to happen next. And so a red headed young man named Thomas Jefferson, with much guidance from men like Benjamin Franklin and John Adams, drafted up their official Declaration of Independence from their former governing body to explain why they believed in what they were doing.

Have you ever read the ENTIRE Declaration of Independence? Not just the part we are familiar with--but the whole thing? I encourage you to do so. It is only when you read the declaration in entirety that you realize WHAT they were saying. What they were truly declaring their independence from and their dependence on. One of the most useful activities I had to do in a literature class in college, was to read the entire text and then write in "language for the common
man" what it was saying. I remember people in my class being dumbfounded as they did it--having never known what this pivotal document to our nation's existence really said.

We, therefore, the Representatives of the United States of America, in General Congress, Assembled, appealing to the Supreme Judge of the world for the rectitude of our intentions, do, in the Name, and by Authority of the good People of these Colonies, solemnly publish and declare, That these United Colonies are, and of Right ought to be Free and Independent States; that they are Absolved from all Allegiance to the British Crown, and that all political connection between them and the State of Great Britain, is and ought to be totally dissolved; and that as Free and Independent States, they have full Power to levy War, conclude Peace, contract Alliances, establish Commerce, and to do all other Acts and Things which Independent States may of right do. And for the support of this Declaration, with a firm reliance on the protection of divine Providence, we mutually pledge to each other our Lives, our Fortunes and our sacred Honor.

Our forefathers, no matter how you slice it or whitewash it, declared to the Supreme Judge of the World that they were going to rely on divine protection. If you try to remove the role of religion in the foundation of our government--you are completing changing history. It is in our founding documents. The forefathers AGREED to it. There was a fear and reverence of God that these men and women had that DOES NOT exist today. You cannot talk away what they meant by reliance on the protection of divine Providence. They all knew what that meant, even if people today stick their heads in the sand about it. They believed that GOD was the Supreme Judge, and could (and would) protect this country. Even those who weren't necessarily "religious" still believed in a "Greater Power" who interacted in mankind's affairs. Why else do we see signs of the Bible throughout our nation's monuments, symbols, money, and documents? Like it or not, much of our nation was founded by men who held at least the most basic of Christian beliefs--and specifically the most elementary of them that there is a God who is Creator and Supreme Judge.

Even the most quoted part of the Declaration of Independence mentions the Creator:

We hold these truths to be self-evident, that all men are created equal, that they are endowed by their Creator with certain unalienable Rights, that among these are Life, Liberty and the pursuit of Happiness.

They knew that man's rights came from their Creator, not the government. Oh how our forefathers would roll over in their graves to see the condition of the nation these 241 years later. They would cringe to see how their words have been twisted and changed from their original meanings. I honestly think they would be ashamed of the men and women in politics today.

And so this Independence Day, let's hearken back to the dream for the nation that our forefathers had, as evidenced in this Declaration of Independence, to see where we stand in 2017 in regards to our "unalienable rights":

They desired us to have the right to life--
Do we have the right of life today? What about the thousands of babies aborted every year? Do they have the right to life? What about the various insurance companies who make it nearly impossible to get the corrective surgeries, or life saving surgeries needed? Or those who are "nickle and dimed" to DEATH by the healthcare system. Or those who are just rejected by the health care system? What about Big Pharma and the way it has poisoned our bodies in the name of profit? Big Pharma that is in bed with Monsanto to keep our food poisoned to continue our reliance on the medicines for the health problems they cause? Who penalize or ridicule those seeking "alternative health care" in the form of non-GMO and organic food, and natural herbal remedies or essential oils or naturopathic medicine--trying to break the cycle of sickness and disease? Do you really believe that our nation protects the right to life?

They desired us to have the right to liberty--
"James Madison said, “As a man is said to have a right to his property, he may be equally said to have a property in his rights.” He meant that even if a person owned nothing else, he still owned his rights, which were the most valuable property of all. True liberty would never allow the government to come at any time and take a person’s property. That would be Divine Right, which they had fought eight bloody years to escape." ~ "What Would the Founders Think?" by James D. Best

We would be lying to ourselves if we said we have this kind of liberty. Just look at the news, and all the times a government swooped in to confiscate things from someone's home, or took their land.

And let's not forget the simple definition of liberty: the state of being free within society from oppressive restrictions imposed by authority on one's way of life, behavior, or political views

Um. Across the board, there is resounding evidence that we do NOT have liberty based on the most basic definition OF liberty. Instead, we grant "liberty" to one political party, to one style of life, to one behavior---and then turn around and deny liberty to the opposition in any of these! (which pretty much translates to if you are of any other mindset besides liberalism and being politically correct, you don't have much liberty at all!) The nation today clearly has a twisted view on what liberty means.

They desired us to the right to PURSUIT of happiness--
Make no mistake. We have never ever had the right OF HAPPINESS. No. But we have the right to PURSUE happiness. What does that mean? "There is debate about what the word "happiness" may have meant in 1776. Current usage focuses on pleasant, positive emotions and having needs satisfied, whereas in 1776 the common meaning may have been "prosperity, thriving, well-being." ~"A July 4th Toast to the Pursuit of Happiness, The Forgotten Unalienable Right", Forbes.com

The pursuit of happiness appears to entail, the pursuit of being able to flourish. So how is that going for you? Do we live in a nation that allows everyone to pursue a life where they flourish? Um....I think instead we seem to PENALIZE those who ARE flourishing. And the government seems to prefer to keep people FROM flourishing--massive debts and taxes engulf our nation, hence the reason so many of our nation are near or below the poverty line!

Of course in all of these apparent issues/problems or discussions of our "rights" we know we are STILL blessed far beyond so many other nations--but the state we are in now isn't what the forefathers envisioned for their fledgling nation of America.


***
It is clear to see that we have unfortunately strayed oh so far from the intention and true meaning of the Declaration of Independence of 1776. It is a sad state of affairs to read the declaration today--because we can begin to see that all the things they were declaring their independence from--once again appear to be present in our OWN American government. We are at the point I am afraid where the only one who can truly save us is that very Supreme Being that the Declaration of Independence declared reliance on.

"Now as He sat on the Mount of Olives, the disciples came to Him privately, saying, “Tell us, when will these things be? And what will be the sign of Your coming, and of the end of the age?” (vs 3)

"Then they will deliver you up to tribulation and kill you, and you will be hated by all nations for My name’s sake. And then many will be offended, will betray one another, and will hate one another. Then many false prophets will rise up and deceive many. And because lawlessness will abound, the love of many will grow cold." (vs 9-12)

Leave our nation and you will see how truly hated America is. Others come to America to destroy it and everything it stands for. Christians are hated above nearly all other religions even in our own nation, and many countries deliberately catch and kill Christians. We are a nation of offended people. We are a nation that has no qualms about betraying each other if it means they can get a leg up. We are nation with much hatred for one another. We are nation living in a great state of deception from the so-called leaders of churches, society, and government.  We are a nation where lawlessness--especially lawlessness according to GOD'S laws--abounds. We are a nation where love has grown cold. Even basic kindness towards your fellow man is a lost art.

Unfortunately, I do not believe we can fix America. Because the people in America frankly refuse to be fixed--not enough people are willing to sacrifice to make it happen. Only God can save us now---but America wants nothing to do with Him. The world is becoming hotter and hotter politically. So many dominoes are ready to fall. And we will see the culmination of our departure from everything our forefathers created for this nation we live in, come to fruition. It's not going to be pretty.

Fortunately, I have hope and confidence in a land beyond this one. While I believe I am very VERY blessed to be a citizen of the United States of America, I give my allegiance ultimately to my Heavenly Father, and His son, my Lord and Savior Jesus Christ. I know that they have plans far beyond anything the forefathers drafted for our nation here on this earth. I know that God and Christ have a world--a Kingdom in mind where one day, ALL mankind will truly experience Life, Liberty, and the pursuit of Happiness. Where we will truly and absolutely be ONE NATION, UNDER GOD.

May you and yours have a most blessed remainder of your Independence Day holiday!

This is why you're one of my favorite people. :) Loved this, and love you!! We read the entire Declaration of Independence as a family every July. I always cry. Love that document and the brave men who drafted and signed it!! GOD BLESS AMERICA!!

Yes. All this. I didn't really feel a true cause to celebrate yesterday - not with the state we are in.