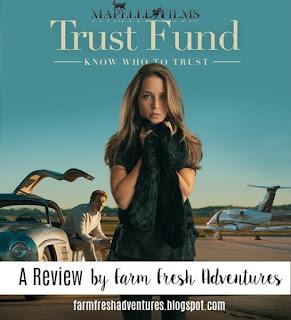 We were recently given the movie Trust Fund from Mapelle Films to review with my family. Trust Fund is a contemporary retelling of the biblical parable The Prodigal Son and has a coordinating book Love Was Near that can be read after viewing the movie. I started watching the movie on my own, but my sons joined me for the second half of the movie.

About Trust Fund and Mapelle Films 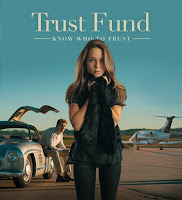 Trust Fund is about the Donahue family, a well known name in the publishing business. The family consists of the father (played by Kevin Kilner) and two daughters, Audrey (played by Louise Dylan) and Reese (played by Jessica Rothe, recently seen in La La Land). Audrey works with her father at the family business, but Reese is a dreamer and aspiring young writer. She feels confined by the pressure to join the family business when she just wants to spread her wings and experience life and love.

One day she learns that her father has been keeping a big secret from her, and it changes her life forever, as she betrays her family and runs away to chase after love. After things get out of control on her own, Reese returns full of nothing but regrets--and discovers her father is there waiting with open arms, teaching her what love really means.


Mapelle Films offers a book Love Was Near and soundtrack to go with the film. There is also a downloadable study guide to help you explore the themes of the movie even more!

My Thoughts on Trust Fund

The Pros
Trust Fund is a movie that is very well done. The cast members were believable in their parts, and the scenery of the movie was gorgeous! (Hello, Italy!) The cinematography was clearly done by someone with skills--it was just as good as any other movie that I've seen. The plot was interesting and pretty fast moving. I didn't feel like there were any spots where it just sort of plodded along. The story was the kind of one that I would pick to watch on my own.

The Cons
When I initially began watching the movie, I was sure that this movie was going to be a faith based film--since it is supposed to be based on The Prodigal Son. That's how it was billed, so that is what I was expecting. As I continued in the movie, I realized I had a misconception. In my opinion, Trust Fund is based on the Prodigal Son kind of the way that a big blockbuster movie done back in 1995 about rich teenage girls in California who do matchmaking, was based on the Jane Austen book Emma. It's a loose connection. I get that the time scenario is totally different. I get that there are aspects of an inheritance in modern times that was not quite the same. And that the screenwriters went with daughters instead of sons. But I felt that the movie was really a stretch to be called "based on" the parable.

As I mentioned above, I also expected this to be a faith based film, but there wasn't any mention of God, Christ, or the Christian faith at all. None. As someone very familiar with the parable, I truly feel like the movie didn't even remotely capture the essence of the parable. The prodigal daughter Reese, basically experienced ZERO consequences for her choice--even though it involved illegal activities that she was involved with. She never showed the repentance that is apparent in the parable--instead just kinda was sorry she got in with the wrong boyfriend which led to bad choices, but I never felt like she wouldn't ever do it again--which is funny because that concept is even part of the script of the movie! LOL. I never really got why she left to spend the money, nor did I really understand why she wanted to come home--except she thought she was going to get in trouble in Italy. She just never convinced me by her actions that she was sorry for what she did. Just that she was sorry it landed her in hot water.

The only one who seemed to truly capture the essence of the parable was the older sister. She made comments that were just like in the parable. She had an attitude of what I would have expected for the older sibling from the parable.

The movie also through in a random secondary love story with Reese once she returns home. It just felt awkward and forced.

All in all, the movie left me feeling sort of unsatisfied. It annoyed me that I never saw the kind of normal consequences the actions of the younger daughter should have experienced--even in the real world. Even in the parable the movie is based on, the younger brother gets to the point where he's barely making ends meet, eating pig slop, and has fallen as he could go. Reese never is at that point. I never believed that she didn't think her dad wouldn't take her back. And even if you take the "based on the Prodigal Son" out of the equation, it still would bother me. Because she had no logical natural consequences--something that no matter HOW loving a father is, or how eager he is to return you to where you were before you "screwed up"--you cannot escape the consequences for your actions. And in the parable, the younger son definitely experienced serious consequences before being restored by his father.

I am even MORE confused after looking at the study guide, because it was pointing out how much the movie represents the story and message of Luke 15--referring to it as a faith based product. Many of the questions in the study guide were very well done. Pointing out decisions each character made and how it demonstrated different aspects of the believers of Jesus. But I don't know. I just never got the feeling that this movie really demonstrated the message of the Prodigal Son.

Now, let me take a moment to state that nowhere on the movie description or the company information does it say straight out that it is a faith based movie. I made the mistake of assuming such purely based on their declaration that the movie was based on the biblical parable (and then backed up by the scriptures cited in the study guide). So my comments are coming from my supposition that it would be a faith movie based on the movie description. However, I truly think that anyone who knows the parable could make the same assumption--so I feel it is relevant to mention my concerns. Especially when you see that the study guide implies that this movie IS supposed to be inspirational in its message.

Would I recommend the movie? I would probably recommend it, but would NOT MENTION that it was supposed to be based on the parable. I think the movie is better enjoyed without trying to piece or match it to the well known parable.

I reviewed Trust Fund by Mapelle Films. You have read my review of this product, but why not see what other crew members thought--and especially those who read the book after watching the movie!